“You absolutely cannot give whole food to someone on a feeding tube,” said the hospital’s registered dieticians. “It will kill him.”

Robin Gentry McGee was watching her father’s health fade before her eyes, feeling helpless and somewhat desperate. He had suffered a fall on black ice that resulted in a serious brain injury and was comatose in a hospital bed.

A devastated McGee held onto the one thing she could — hope.

The weeks ticked by, but just as nothing could stop a Mama Bear trying to protect her cubs, McGee had a fierce loyalty, an abundance of love, a desire to protect her beloved father, and a hope that spawned an absolute determination to do everything in her power to turn things around.

McGee picked up the feeding –tube formula bag and turned it over to read the ingredients. She stumbled across the reason she felt her father was declining so rapidly.

Further, she had an idea of how to improve his condition and decided to act upon it. 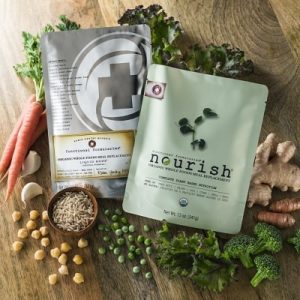 The proof is in the Studies

Her solution, in retrospect, was simple, yet it had eluded an enteral industry.

What Was Her Idea?

When McGee read the list of ingredients on her father’s feeding-tube bag, she was, in short, appalled.

Essentially, her father was being kept alive by sugar. And chemicals.

“This is the Way We’ve Always Done it”

McGee was not personally attacking the hospital’s registered dieticians. She understood that they were responding with everything they had been taught.

But McGee, having a long history in the natural food industry, had dedicated her life to promoting the benefits of real food — organic, non-GMO, vegan, vegetarian, whole food, as in, “You are what you eat.”

And her realization that her father was “what he ate” made her realize he was responding just as anyone would with a lack of nutrition. Feed him sugar, sugar, sugar, and chemicals, and he would expectedly decline.

So, McGee got to work immediately.

Her vast knowledge, supplemented by some specific additional study, McGee used trial-and-error to come up with a feeding-tube formula that would meet the strict requirements of such, yet focus on providing real food — real nutrition — in a feeding-tube scenario.

The result was Liquid Hope, a name McGee and her family members coined in their efforts to make her father better.

In short, her father improved rapidly. He went from taking 17 medications to taking just one.

He regained his strength. Although he was no longer in a coma, he was rarely alert. Six weeks after starting Liquid Hope, all of this changed, and he was able to enter a brain rehabilitation program. Liquid Hope, McGee believes, was responsible for this improvement.

“It’s like a no-brainer: Give people real food, and they will improve.”

About the Clinical Study

As the nature of clinical studies go, the findings are written for medical professionals, but highlights from the year-long study yielded compelling results.

The study, using mice with colitis, compared Liquid Hope to one of two other popular enteral formulas for one week. After the week, scientists measured their weight, several markers of inflammation, and various markers for microbial population, particularly those that research had linked to risks for infection, along with other markers.

The most important take-away is this: Liquid Hope provided an overall better level of health observed by the investigators. “Mice fed Liquid Hope in this model of gut inflammation had superior outcomes compared to mice fed the other commonly-used enteral formulas.”

(Editor’s Note: The complete clinical trial is linked to the end of this article.)

Yet, Detractors and Wanna-Be’s Abound

When someone gets it right, the first thing to happen is that others either want to react with skepticism, or replicate their success.

There have been a handful of companies that seem to have tried to duplicate McGee’s discovery, but to date, all still contain sugar in some form. Although it is a very easy way to add calories, when one replaces corn syrup with brown rice syrup, fruit juice or fruit purees, it is still sugar. And a diet based on sugar not only lacks nutritional density, McGee believes it is the worst possible thing you can give to a patient in a compromised medical position.

Based on McGee’s experience with creating Liquid Hope, she knows all too well how very difficult it is to achieve a dense calorie profile and not fall to sugar as a crutch. That is why Liquid Hope took eight years to perfect before launching in to the marketplace. McGee and her team of Functional Medicine advisors feel it is very misleading to the consumer and the medical world alike; the products touting “no added sugar” are, in fact, full of the one ingredient that started McGee down this road.

Included in this list is one of the largest manufacturers of enteral nutrition in the world, which is now on its third reformulation of their “real food” product, and they have recently announced they are going “organic.”

Is it gratifying for McGee to know and understand that she alone has changed the clinical nutrition market worldwide?

“I’ve mixed feelings,” said McGee. She is thrilled consumers now have choices, but she also feels that true nutrition is being swept away, and all of the companies now launching in to this space are still working from the outdated “a calorie is a calorie” model, and cranking out products that, to the uneducated eye, seem healthy, but when adding up the fructose in these products, she cringes.

What started simply as a daughter doing everything she could to help her father recover from a serious brain injury has morphed into a global effort by McGee to share what she learned from her experience: Real food, real nutrition, can help a faction of the population that relies on a feeding tube. Just as Liquid Hope was developed out of love and care, it has been McGee’s mission to spread this love and care to anyone else who finds a loved one in a medically compromised position.

It all comes back to giving hope — and Liquid Hope — to those in need, a position that has not wavered with McGee ever since she sat vigil beside her father’s hospital bed.

Indian Scientists Claim To Design Vaccine For All Variants

No Result
View All Result